If you’re a big Al Pacino fan then one movie that you will have almost certainly seen is “Scarface” which tells the story of Cuban drug lord “Tony Montana”. As with many Pacino films it ends in bloodshed (and there is bloodshed throughout it has to be said) but it is a classic and if it teaches you one thing it is that crime doesn’t really pay. One lesser-know Al Pacino movie is “Dog Day Afternoon” and for me it is a better film than Scarface. There is much less violence and there is humour and emotional sentiment throughout. It is a film that I only discovered a year or so ago and having watched it I thought it was fantastic.

Dog Day Afternoon was made in 1975 and tells the true story of a 1972 bank robbery in Brooklyn, New York that went – you could say – not exactly as it was meant to. The story focuses throughout on the characters Sonny Wojtowicz and Salvatore Naturale, played by Al Pacino and John Cazale, who attempt to rob a bank in a routine heist with accomplice Stevie (Gary Springer).

Once inside the bank their masterplan begins to go awry once Sal (Salvatore) is forced to brandish his gun. Stevie loses his cool and Sonny and Sal decide to let him flee the scene before he becomes a liability. They are then down to just the two of them.

Soon after this, Sonny and Sal realise they are holding up the bank on the wrong day. The daily pick-up had just been made previously and only a little over a thousand dollar is left in the safe. To make up for this they decide to steal a bundle of travellers’ cheques and attempt to cover their tracks by setting fire to the bank’s register. This merely succeeds in sending smoke out of the building and alerting all and sundry outside to a “problem” at the bank. Soon after the bank is surrounded by police. The small-time crooks have no option but to remain holed up using the bank staff and customers as hostages.

The rest of the film plays out with the negotiations between the police and Sonny, as well as the relationships that are developed between Sonny and Sal and the hostages. At times it is comical, not least when Sonny emerges from the building with a hostage to talk to the police. The gathered crowd soon start chanting in support of Sonny. See clip of this below (warning - there is some swearing in this):

As in many movie hostage situations, everyone needs to eat at some time and the obligatory pizzas are delivered to the hostage scene. Mention of a helicopter is never far away and right on cue, Sonny demands a helicopter be delivered so that he and Sal can make good their escape.

The film then takes a somewhat unexpected twist when Sonny’s wife (Leon) arrives at the scene where it is revealed that his reason for robbing the bank is to pay for his wife’s gender reassignment surgery. Leon later explains to Sonny that she had previously attempted suicide in order to get away from Sonny and confirms that wherever Sonny and Sal go to after escaping the bank she will not go with them.

Sonny’s mother then turns up but is unable to persuade the robbers to give up their heist. A limousine then appears to take them all to the airport to a waiting helicopter. In the car the police agent manages to overpower Sal and Sal is shot in the head. Sonny gives himself up and is arrested. Do bank robbers/hostage takers ever get away in a helicopter? I don’t think I can ever remember a movie where that happens.

Sonny was given 20 years in prison.

Dog Day Afternoon is a superb film and I encourage everyone to see it. Once again – crime doesn’t pay!

Canvas Art Rocks have a fantastic selection of movie canvas prints including Scarface prints to name a few. Take a look.

My teen was interested in a Banksy wall sticker for his room. We selected this one in the largest size. When it arrived (we waited a long time but it was resolved nicely) I went over the application instructions with him and then left him to do the project on his own. It went perfectly and he's really happy with how it turned out! 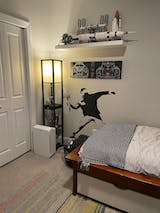 I chose the box canvas print and it arrived in tact exactly as I imagined. I have a few other Banksy prints and they're all great. I love the subtle humor in them. I am very proud and happy to add them to my art collection. Priced well too

Absolutely beautifully done! I love it! My living room has a sort of movie/noir theme to it, and I love having Walt be a part of it! My favorite line from breaking bad! It makes me so happy to see it every day! 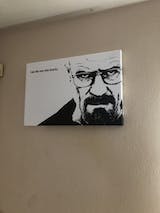 My only regret in my purchase of this item is that I didn’t buy it in a bigger size! It is BEAUTIFUL! I could not be happier with it! It even smelled brand new when it got here and practically shined! So happy to have these guys hanging in my house! Fits my living room perfectly!

Love my A team shirt and I rock it with old school pride. Will definitely be ordering more from the wide selection